Long-term care use during the last 2 years of life in Sweden: Implications for policy to address increased population aging 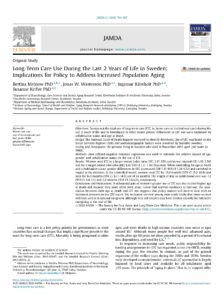 Objectives: To map out the total use of long-term care (LTC; ie, home care or institutional care) during the last 2 years of life and to investigate to what extent gender differences in LTC use were explained by cohabitation status and age at death.

Design: The National Cause of Death Register was used to identify decedents. Use of LTC was based on the Social Services Register (SSR) and sociodemographic factors were provided by Statistics Sweden. Setting and Participants: All persons living in Sweden who died in November 2015 aged 67 years (n ¼ 5948).

Methods: Zero inflated negative binomial regression was used to estimate the relative impact of age, gender, and cohabitation status on the use of LTC.

Conclusions and Implications: A substantial part of women’s greater use of LTC was due to their higher age at death and because they more often lived alone. Given that survival continues to increase, the association between older age at death and LTC use suggests that policy makers will have to deal with an increased pressure on the LTC sector. Yet, increased survival among men could imply that more women will have access to spousal caregivers, although very old couples may have limited capacity for extensive caregiving at the end of life.